I am so madly in love with the paperback design of JACK, I can hardly stand it. And look! It arrived today, all shiny and ruddy and alive. I’m beside myself. I’m a fluttery, swoony mess. 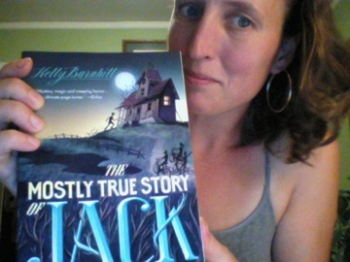 I’m not entirely sure how this all works from here – like when they show up on shelves, for example. I know they’re in the warehouse, so one could order them, should one choose (and by “one”, I of course am referring to my mom). In any case, I’m terribly pleased and I had to share.

Anyone else have good news to share with me?

I just got the go-ahead to share the new cover for the paperback release of The Mostly True Story of Jack. (It hits the shelves on September 11 this year. Mark your calendars.) And I’ll tell you what: I am over the moon for this thing. Over the friggin’ moon.

I’m going to show it to you in a minute.

It’s a funny thing about covers, just in general. As a reader, I can say with absolute conviction that a cover can have a massive influence on whether or not I buy a book – either for myself or for something else – as well as the relationship I have with the text at the outset of the book. Forget the truisms: I judge. And so do you.

Now, that doesn’t necessarily mean that books with crummy covers are ultimately doomed. I read a book recently from a writer that I admire, and an excerpt of which I had already read so I knew it was good – and it had the ugliest dang cover I had ever seen. Would I have read the book if I hadn’t known it that the author in question was fantastic? Probably not. Did the cover ruin my experience reading? Well, no…..but I did go in with a certain amount of trepidation.

As a species, we came of age experiencing art visually and aurally. Reading art came way later, and it remains less primal. So covers matter.

Writers worry over them and fuss over them and have absolutely no control. What the cover looks like is almost entirely out of our hands. We hold our collective breath and cross our fingers and visit mediums and gurus and voodoo priestesses and friendly neighborhood witches. We light candles and whisper prayers to the Cover Gods, but in the end, we just have to wait.

I’ve been lucky. I loved the hardcover jacket art on Mostly True Story of Jack, and I had just assumed that lightning doesn’t strike twice, and that I simply wouldn’t like the paperback cover as much as I liked the original.

And oh! Heavens! I was wrong. I like it even more!

Little, Brown hired the same artist to do the pb cover for Jack and both the cover and the interior illustrations for Iron Hearted Violet (which I don’t have the go-ahead to share with you yet, but my word. Just. Wait.) His name is Iacopo Bruno and he is a genius, and if I was still in a child-bearing mode of my life, I would be sorely tempted to name my next kid Iacopo, because he rules.

Here is JACK. Isn’t he pretty? 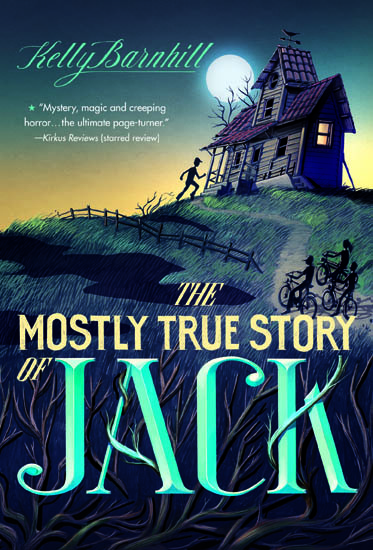 Okay, not that kind of star. But a magnificent star all the same. And it came with a nice review! Here it is in its entirety:

The Mostly True Story of Jack.

When Jack’s parents’ marriage unravels, the boy is sent from San Francisco to live with his eccentric aunt and uncle in Iowa. The experience is a revelation for Jack—who is accustomed to being virtually invisible at home and school—as he finds he has friends that are in their own ways as odd as his aunt and uncle. Then he is noticed and beaten up by a bully, and then the powerful town villain seems to be making plans for him—dark plans. What’s going on here? The answers are not given up easily, and that’s just one facet of this delightful puzzle of a book. It is also wonderful in the best possible way: filled with wonders and magic, yes, but magic that is ancient, numinous, and tied to the natural world. Readers are tacitly invited to help untangle this deep and complex web. Barnhill’s first novel for children is a marvel of both plotting and characterization, and it provides a foundation for the omnipresent magic that elevates this title to the first rank of contemporary children’s literature. Best of all, an open ending suggests the possibility of a sequel. Readers can only hope.

Now, it doesn’t go live until August 1, but I have been given special dispensation to post it here.

And now, my darlings, I must dance around the room. You can join me if you’d like. Mr. Sammy Davis, Jr., will you please serenade us?