This weekend, I had a whirlwind, didn’t-see-90%-of-the-people-I-hoped-too-but-still-saw-SO-MANY-GOOD-FOLKS, magnificent visit to good old New York City in order to participate in Book Expo America, or BEA for those who know the publishy-lingo. I went because my book had been chosen as a Middle Grade Buzz title, which was a huge and astonishing honor. My publisher, then, was kind enough to introduce me to lots of librarians and book sellers, and to make a goodly stack of the ARCS of THE WITCH’S BOY available for those who wished to read it before the book came out.

A lot of people wanted it, apparently, because within the hour, the goodly stack was a memory of a goodly stack and all the books were gone. This was surprising to me.

Anyway, some day soon I am going to write a love poem to my publisher, Algonquin, who is filled with wondrous, magical and fiercely intelligent people that I absolutely adored meeting and talking to and getting to know. Meeting the whole team was nothing short of a joy. Plus they made this cool poster for the books – both for kids and adults – that are coming out soon. See?

Anyway, I am still processing much of the many wondrous conversations I had over the course of the long weekend, and I am still rather jumbled up, I’m afraid. Instead, I will have to provide a List of Highlights. Ahem:

1. Meeting my beloved editor, Elise Howard, for the first time. 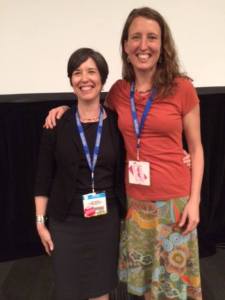 In case you did not know, I am a giant.

Seriously, you guys. She is amazing. I have been telling people for the last year and a half how much I have treasured my experience at Algonquin, how my editor’s insight and intelligence and her knack of seeing not only the bones of the story, but its sinews and connective tissues – the chambers of the heart, the connections in the brain, the ineffable soul (all of it; she sees all of it) – have pushed me into a space in my writing, and a level of artistry,  that I never would have reached on my own.  And I am forever grateful. And I absolutely LOVED meeting her and hanging out and picking her brain and listening to how she works and even chatting about random things – kids, other books, goofy goings-on in NYC. The whole bit. It was most grand.

3. Bringing my husband along. I have never done this, actually. And, as it turns out, it was the first time we were away from our kids since 2003. For those of you doing the math at home, that was . . . some years ago. In any case, there is nothing like getting organized for a panel – a Buzz Panel, no less – and seeing your favorite friend in the audience.

4. THE BUZZ PANEL! It was awesome! 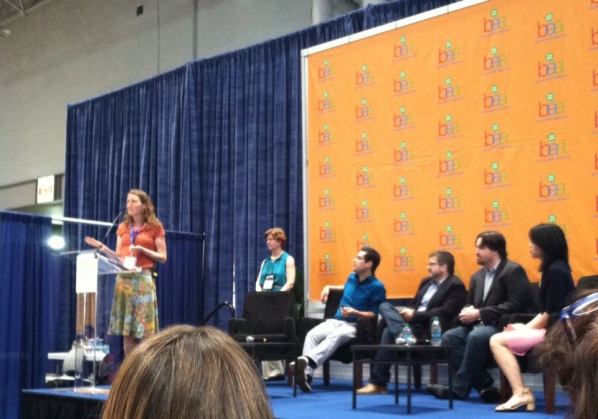 Despite various snafus regarding microphones (which is why I am standing at that podium instead of facing the people I was actually talking to) we actually had a great conversation. I enjoyed the heck out of all of those people (and Rob and Kat, your books are currently being read to pieces by my kids. So.)

5. THE KIDS AUTHOR CARNIVAL! Also awesome! Thirty-seven kidlit authors and an army of bloggers and great crowds of book-loving kids! And how great was it to hang out with hordes of kids swarming the halls of the Jefferson Market Library (which, by the way, looks like Hogwarts), with a bunch of my kid-writer buds that I’ve known for months or years online, but only just got to meet in real life. This whole thing was organized by Claire LeGrand – who is just as amazing in person as she is on the page – and it was a huge success. I had no less than twenty parents come up to me and say that this MUST happen next year. And I agree.

6. Catching up with my beloved Genevieve Valentine, whose new novel, THE GIRLS AT THE KINGFISHER CLUB (a retelling of “The Twelve Dancing Princesses” story in 1920’s Manhattan) (I KNOW! I think you should read it too!) releases tomorrow.

(“But,” my son asked. “Were any of them ninja librarians. Or secret-super-hero librarians?” “Yes, my darling, ” I told him. “They all were.”)

9. The books! I have three tote bags full of books that I managed to haul all the way back home. My arms hurt. And my eyes are tired because I stayed up too late reading. There are worse problems to have.

10. Standing for an hour chatting with people at BEA, signing book after book after book until my hand started to shake, and meeting people that I have had lovely and heart-felt exchanges on Twitter, and seeing their beautiful faces and hearing their beautiful voices, and realizing that social media – despite its capacity for silliness and cruelty and infantilized blatherings posing as profound – really does bring us together. It truly, truly does. To those of you who I met for the first time, but have known for far longer than that, I’d like to say this: thank you. Thank you for stopping by. Thank you for lending me your time and your spirit. Thank you for existing in the world. Thank you for your continued conversation with me about books and culture and race and gender and childhood and teenhood and growing up. About the world and everything in it. About the universe we know and the universe beyond. Thank you so much.

Okay. Now to get back to writing. Because this book isn’t gonna write itself.

2 thoughts on “Regarding BEA, the Kids Author Carnival and other NYC shenanigany stuff.”