This is my dog.

Her name is Harper, and she is very old. Decades. Centuries. A cool millenium. You might not believe me that she is actually 1,000 years old, and you might try to convince me otherwise, but I would like to point out that you have no proof. And she’s my dog. So.

She has been in our family since 1998, back when my husband and I were two shacked-up quasi-Communist, vaguely Anarchist ne’re-do-wells, stomping around Stumptown in our government-issued firefighter boots and quoting Saul Alinsky at whoever stood still long enough to listen. We lived in a house with a bunch of other twentysomethings and their various friends, partners and hangers-on – artists, puppeteers, Wobblies, graduate students, people who used to work for ACORN, and so on. I would make huge vats of beans and rice and someone would bring beer and we would play cards and eat and argue until early in the morning. My couch often had some guy sleeping on it. Some guy in need of a shower.

And then this dog showed up at our friend’s house.

In retrospect, I understand that the dog was a prophecy of sorts. A sooth-sayer. A sign.

Your life will change, the dog told us. Indeed, it is changing already.

She was in awful shape – hungry, filthy, cold. She had only just had puppies. She was still lactating and her womb was all busted out. She had the shakes. When you pet her, your hands turned black. She was frightened. If you moved your hands too quickly, should would cower and whine. She had a tender spot on her head that she didn’t want you to touch. She was wary, wounded. And I loved her. Instantly.

We weren’t going to keep her, not right away. We wanted her with a family. We had housemates with allergies, and couldn’t keep her indoors. She deserved parents and kids and teenagers. Someone to snuggle with next to a fire. Road trips. Hikes in the forest. A little child to dress her in a cape and a facemask and call her SuperDog.

It is happening already.

We brought her to the Humane Society, and then had to move heaven and earth to get her out and back home with us before they put her down (they had a policy not to keep mixed breed dogs alive, or even to make them available for adoption;  they did not tell us this policy when we brought her in and told them explicitly that if they couldn’t place her with a family that we would take her, joyfully; there were, then, very tense words, uttered by me, with swearing; we got our dog in the end). I’ll tell you what, nothing bonds you to an animal more than saving her from certain death. Nothing at all. 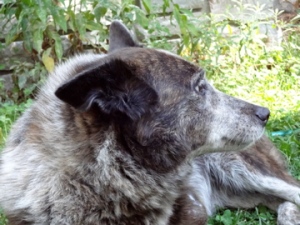 We took her to the vet. “This is the healthiest half-starved dog I’ve ever seen,” the vet said. “She’s made of barbed wire and duct tape and galvanized steel.” He gave her some shots and removed her uterus and guessed that she was somewhere between three and five. “Clearly full grown,” he said, “but young enough to still be a spaz.” (It is now 2013. She is still a total spaz.)

She was a tough mother. She’d go on ten-mile runs with me and wouldn’t even get winded. She ate entire packages of bakers chocolate and didn’t even get a stomach ache. She ate, digested and shat batteries, and didn’t blink an eye. She never got sick, never got hurt, never skipped a beat.

We took her with us everywhere. We went for long hikes. We took her to the coast and Forest Park and Columbia Gorge. We started eating outside and hanging out on the back porch, just to be near her more. And we changed. Ted and I noticed that our youthful resistance to life-long commitment started to ease, and our discomfort with aligning ourselves with institutional relationships drifted further and further away.

Family, we started to say. You’re my family.

All the while, there was Harper the dog – babysitter, muse, helpmeet, protecter, janitor, exterminator, friend. She built us into a family.

Two summers ago, we brought her to the BWCA. She almost didn’t come back. Later that year, she developed a tumor on her leg that grew and grew and grew. It impeded her gait. It kept her from doing the things she loved to do. The vet counseled us not to do the surgery to remove it. “She’s so old,” the vet said. “She might not survive the surgery. And if she does, she will heal so slowly. She’ll hurt, she’ll infect, and she won’t know why.”

We did it anyway. Her tumor was three pounds – bigger than a puppy. She healed like a champ. The vet was amazed. “It’s one thing,” he said, “to have a dog the age of Methuselah. Lots of people have those. But to have an ancient dog heal as fast as a puppy? Either you’ve been replacing your dog with younger models of herself, or you have a dog who is virtually ageless. One or the other.”

Three weeks before Christmas, Harper suddenly started walking with a limp. A week before Christmas, she stopped putting any weight on her back left leg at all, preferring to move like an ambulatory three-legged-stool around the house and yard. And, all in all, she’s doing pretty well with it. She’s still eating, still drinking, still in high spirits, still chasing squirrels, still barking at the raccoons that hide between our garage and our neighbor’s fence. But she won’t let her leg touch the earth.

I took her to the vet.

He took a deep breath and sighed.

She has, it seems, odd formations on her bone. It could be atypical bone spurs due to a weird manifestation of arthritis, or it could be bone cancer. In any case, due to her advanced age, we will treat it the same way – palliative care and lots of love until that doesn’t work anymore.

Which means that I am actually going to have to get used to the fact that my dog will not live for another thousand years, and that she is not immortal, and that she is not from Mount Olympus or the Isle of the Blessed. She is herself. Harper. My dog. And I will love her and love until I can’t and she will live until she doesn’t, and that will be that.

I have written this entire blog post with Harper sitting on my feet. I gave her a piece of beef jerky a little bit ago, and I know that she is waiting patiently until another piece appears in my hands like magic for me to give to her. She shifts her weight and groans a bit. Her leg hurts. My heart hurts. She rests her chin on my knee.

Your life will change, she says.

No one ever does. Your life will change. Indeed, it is changing already. She breathes deeply through her damp nose and closes her eyes. She is alive, she is alive, she is still alive. For now. As we all are. And sometimes, that’s enough.

For all of you with dogs in your life: bless you. May your beloved animals live for a thousand years. May they change your life.

[**for an update on Harper’s status, her story continues here.**]