In my first year teaching, one of my reading groups had chosen Harry Potter and the Sorcerer’s Stone as their shared book for that month. And boy did I catch hell from some parents. I got all kinds of nonsense  – from “the scar on his forehead is an obvious allusion to the Mark of the Beast”, to “I don’t want my child reading about witchcraft. I have a hard enough time controlling him as it is”, to “you shove a bunch of goddamned fantasies into these children’s heads and they won’t be able to know what’s real any more.”

Because I believe in books and I believe in Story (and I secretly believe in magic), I laughed off the parents’ concerns, and relegated their voices under the category of “Total Nuts That I Have To Put Up With.” I made some accommodations for the children whose parents wouldn’t budge, but mostly I just thought those parents were being silly – and I told them so.

And I never thought about their concerns again. Until recently.

Two thirds of my children are Harry Potter fanatics. They’ve read those books, re-read them, re-re-read them, and refer to specific passages as they correspond to particular events or decisions in their lives as sixth graders and third graders, respectively.

They can tell you, in exquisite detail, the points at which the movies diverge from the books; they can tell you – chapter and verse – the moments in the books in which character is revealed, in which clues are hidden, in which mysteries are unraveled. They have spent months assembling character-based costumes – both for Halloween, and just for fun – and have assumed the identities completely – Hermione, Bellatrix Lestrange, Mad-Eye Moody and Professor McGonagall. My children live in the Potterverse. Those books have seeped in through their fingers, permeated their bloodstreams, fed their dreams.

And maybe this is problematic.

My husband was driving my oldest home from a basketball game this weekend. As they drove past the snow-covered field, Ella glanced over at a black lab leaping upwards to snatch a red frisbee from the air. Her eyes widened and she let out a panicked gasp.

“OH MY GOSH!” she screamed.

My husband jolted in his seat. “What?” he asked.

“Oh,” Ella explained. “It’s nothing. I just looked over at the field and thought I saw a giant spider.”

Ted drove in silence for a moment. Finally: “A giant spider?”

Ella sat primly in her seat, her hands folded in her lap. “Well, obviously. You see something out of the corner of your eye, something black and hairy with legs flailing every which way as it hurls itself into the air. What was I supposed to think?”

Ted, biting his tongue to keep from laughing, stayed silent.

“It was perfectly reasonable,” my daughter insisted.

And maybe she’s right. It likely is perfectly reasonable – if your brain has been hijacked by Hogwarts and your brain is filled to bursting with magical adventures.

Of course, if the book burners had their way, she’d be exclusively reading the Bible and the Left Behind books, which means that, given the imagination on this kid, she’ll be blowing horns at city walls, expecting them to come tumbling down, and will likely assume that every empty pair of shoes is evidence of the rapture.

I think we’ll stick with the giant spiders. 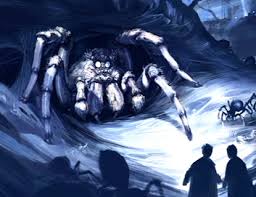